Sitting in a coffee shop working on an article and these two people walk in on their first date.  I had planned to just ignore them and be respectful of this beautiful moment in their lives,  but they’re being really loud in the ridiculously quiet coffee shop so I have no choice but to eavesdrop.

And here we go…

You should know that there are like 8 of us in here on our laptops trying to work on stuff, so this is not the most romantic of environments.  I can only hope that some of these other people are documenting this as well.

If these 2 get married I’m going to sell them a transcript of this date.

Okay, we start out with the “where are you from?”  Not bad, good to lay that groundwork.  So this is clearly an online set date or a setup.  Nothing wrong with that, it makes the date kind of exciting when you don’t know about each other.

Then we segue in to sports.  She’s playing the I’m-one-of-the-guys card.  He seems to like it.  Well played lady.

I missed a few lines because someone else was talking.  When the background noise faded away we were either talking about his ex or his mom.  Not sure which, but whoever it was she didn’t like NC and moved back home.

OH NO, she just asked if his parents were still married IN THE FIRST 5 MINUTES!!!!

Oooh, someone texted her and she stopped the convo to check.  He didn’t really like that, but it’s okay they recovered quickly.

She’s trying to whisper…doesn’t she know that’s rude to the people around here trying to eavesdrop?  Geez, some people have no manners.

I’m suddenly realizing that I went on a first date here last year.  Was anybody recording that like I am now, I would like to have it?

He just apologized for something, but I don’t know what.  I can’t look up because then they’ll know that I’m paying attention to them, so that just leaves me to assume what needed apologizing for….hmmm, maybe he dumped coffee in her lap?  Maybe he did that thing where you accidentally kick someone under the table.  Maybe he checked out a girl who walked by.  So many possibilities.  I want to look up SO BAD!

We’ve progressed in to family stories.  I hear wedding bells!

I wonder if they’ll want me to be the maid of honor since I’m such a big part of this relationship.

I really want to look up and find out what these people look like.

He just said “I got the shaft” and my mind is going crazy with That’s What She Said jokes.

Silence…I’m timing it…45 seconds.  That was uncomfortable for all of us.  I wonder if they’ve noticed that when they stop talking I stop typing.  I don’t think they’re on to me.  I’m so stealthy.

It’s a little early for a coffee date.  It’s only like 5.

Um, words that should not be used on a first date: condom.  I’m not going to give you the context because I’m a lady.

I should really be working on my article right now.  Oh well.

NOOOO, someone else is reading out loud.  I have a feeling from here on out this is going to be half date and half science lecture.

Other words that should not be used on a first date: conceived.  She was talking about siblings, but still.  That word is icky.  Plus everyone knows this is where babies come from:

I just peeked up.  Their body language doesn’t match.  He’s leaning in to the table and her spine is super straight.  I can’t see their faces because I’m old and I’m not wearing my glasses.

OH NO, this transcript may be over.  They found out they both speak Spanish so now they’re speaking in Spanish!

Oh good, they stopped.  Clearly they don’t hablo as well as they thought they did bc 30 seconds in they were tapped out.  Thank you North Carolina public schools. 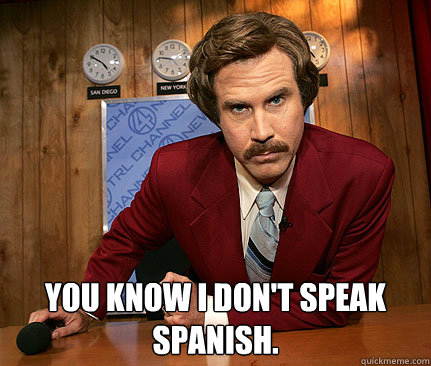 Hmmm, I’m getting bored with the way the conversation is going.  I need something to entertain myself while this drags a little bit.  And that’s when I found the greatest gif in the world:

Okay, now she’s talking about all of her travels and all I can think of is this

I think everyone else has cleared out except for me and this “couple”; finally, some privacy.  Gosh, some people can be so intrusive.

Ummmmmm, he travels.  I might have to break them up and take him for myself.  Pull a Yoko.  Still don’t know what he looks like.

The air conditioner just cut off.  I didn’t realize how loud it was.  Now I’m just going to type random letters so they don’t realize that I’m listening in.

Now we’re talking about Christmas.  Maybe an invite is coming, to go home and meet the parents?

Okay, I didn’t hear the context of this next sentence but it was a gem: “It’s a little greasier than shampoo”.

Awwwh, he’s going to get her a refill.

Oh no, she made a joke about this being the time where he sneaks out!  Bold move!  And now we wait to see if he really is coming back or if she just gave him an idea for an out.  I think he’s coming back, they seem to be having a pretty good time. I bet you 20 Schrute bucks that he returns. 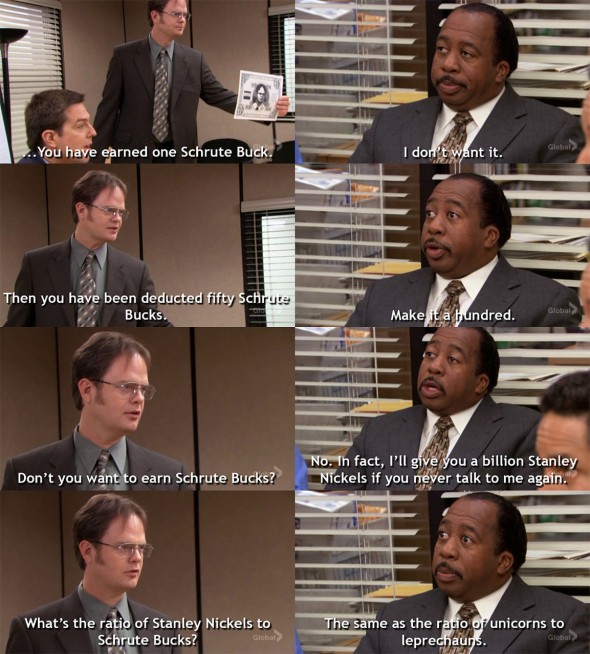 Still waiting.  That line must be long.  She’s playing on her phone, probably answering that earlier text.  That better not be a guy you’re talking to missy.

I wonder if it will be awkward when he gets back.  I always find it hard to restart a conversation once there’s a break.

She’s being very patient.  Not at all fidgety.  Go ahead on girl, I like the confidence!

Still waiting.  Oh coffee shop barista, you’re slowing true love.  Please give that man his coffee so he can come back to her and sweep her off her feet.

You don’t need to know all of this detail about the wait, but I don’t want to stop typing because I’m a loud typer and it would be obvious.  And so I get to bring you every glorious detail.  We’re still waiting by the way.  5 minutes have passed.  5 minutes of romance just gone now.  We will never get that time back.

Ooh, I think he’s back.  YES!! He’s back!  True love prevails! And they lived happily ever after! Just kidding, we’re not even close to done.

Okay, the coffee conversation is still going.  Let’s wrap this up and segue in to something more interesting.  Seriously, there are coffee plantations in Columbia that don’t talk this much about coffee.

Folks, we need to wrap this date up.  I have to be somewhere in a little bit.  Should I go over and give them a 10 minute warning?  Okay, I’ll wait.  I don’t want to rush the magic.

Ooh, he’s not sure he wants to keep living here in the area?  That could be a problem.

Hmmm, we’re talking about families again.  Maybe they aren’t on a date, maybe these are the negotiations for the arranged marriages of their siblings.  That would make this a little more interesting.

Conversation kind of dwindling.  We might be winding down.  He’s still laughing though, so clearly he wants to keep this going even though conversation might be tapped out.

Hang on, I think they saw me.  If I stay completely still they won’t be able to see me, right?  Oh wait, that’s a T-Rex.

Whoa, new comer.  This other guy just walked in and he’s sitting SO CLOSE to them.  This might be the end of the night.  It’s hard to be adorable when there is a stranger sitting that close to you.

More words you shouldn’t say on a date: hooker.  I thought this one was obvious, but apparently not.  New guy sitting close to them looked up at that one, which was lucky because I actually laughed but they were distracted by him.  Men of the world, don’t tell any story on a first date that requires you to say the word hooker.  You’re welcome.

He’s telling this really long story.  I got confused and zoned out.  I was still too busy laughing at hooker.

This story is still going.  I’m watching this again

Hahahahahaha, it makes me laugh every time.

My leg is numb and I want to move it, but I’m one with my environment, going totally unnoticed.  Like that woman who studied monkeys in their natural habitat.

Okay, this place is filling up again.  Let’s wrap it up.

This girl sounds exactly like one of my friends from work.  I know it’s not her, but it’s making me smile.

Spanish again.  Okay, we got it.  You hablo.

Umm, I don’t think he actually speaks Spanish and I don’t think she has any idea.  He just sort of nodded at what she said and gave a grunt.  Busted!

I wish I had paid more attention in Spanish class.  I’m sorry, I have failed you all.

The guy sitting next to them is moving around, trying to find an outlet for his laptop.  It’s making the couple nervous.  Did they not realize there were other people here?  Awwwwh, that’s kind of sweet.  It also means that I am an expert at blending in.

I think we just passed the 1 hour mark.  That’s some good work folks!  Sure, they aren’t really talking about anything anymore, but we made it.  I think there is a date 2 in the future.  I hope I’m there for it.

Is date-transcription a profession?  I’m really good at this.  This should be a marketable skill.  I mean, people have photographers document their proposal, so I bet I could market this.  Tracy Combs: Date Documentor.

Um, I have plans for dinner so we need to be winding down…

Let’s end on a high note folks, don’t just wait for the conversation to fizzle.  Wait for a really good moment and then make your exit.

Okay, I think the convo just took a sad, ex girlfriend-esque turn.  You should have taken my advice and bowed out a second ago.

People are being loud again.  I don’t have the focus for all of these conversations.  I’m on overload.

I think all the commotion is putting a damper on the love birds.  It’s kind of killing the mood.

Oooh, nevermind.  The noise just made them lean in closer.  That’s adorable.  I so want him to slide a meatball across the table with his nose.  Probably won’t happen, you know, since we’re at a coffee shop and there are no meatballs.  In a perfect world.

Well folks, I have to go.  But I’m fairly certain I already know how this plays out, so I’ll just go ahead and wrap this up in a bow for everybody.  After their first date, they start seeing each other regularly, spending long meals staring into each others eyes and talking about coffee for way too long.  After meeting the families over Christmas they immediately get engaged on date 6.  Short engagement, wedding in Atlantic City somewhere classy with lots of blinking lights and an Elvis minister.  Then they buy a house in the suburbs and have 3 kids and a golden retriever.

22 Nov This entry was published on November 22, 2013 at 1:38 am. It’s filed under Uncategorized and tagged couple, date, eavesdropping, first date, rude. Bookmark the permalink. Follow any comments here with the RSS feed for this post.