Things You Shouldn’t Say In A Crowded Starbucks

Things you shouldn’t say in a crowded Starbucks:

Yeah, that’s actually about it.

Truthfully, there aren’t really many places where that word is okay to just throw out (or in this case, just randomly shout in the midst of a packed coffee shop). But somehow this man never learned that lesson as a child. [Lesson #1- Don’t run with scissors, Lesson #2- Look both ways before crossing the street, and Lesson #3- Don’t incite panic in crowded places]

So I was sitting in a Starbucks along with every other living person in Durham. It was the sort of packed where strangers were asking if they could share tables because there was nowhere else to sit. One person had even given up completely and was actually on the floor.

I was in one of the big comfy chairs working on a project, when all of a sudden I realized the guy at the table beside me was acting all squirrely. We shall call him Guy #1. He was staring all creepy like at this other guy (who we shall call Guy #2) who had just come in with some groceries and taken a seat. And I mean STARING! Like uncomfortably leering, all suspicious and creepy-like. I mean, restraining orders could have been issued based on stalking type of staring. So of course I was all over this, because weird stuff happens in coffee shops and I like to eavesdrop in on that stuff for your reading pleasure (see: first date eavesdropping, corporate eavesdropping, early bird eavesdropping).

[Now keep in mind, this Guy #2 was not threatening at all. Yeah, he was a little dirty looking like he just got off work, but he wasn’t menacing. At no point did he start waving a machete, shouting threats, acting suspicious, or setting trashcan fires. He was just quietly drinking a latte.]

So Guy #2 with the groceries finishes his coffee, unaware of the crazy scrutiny he is drawing from Guy #1, then he gets up, picks up his groceries and leaves.

But this is where things got weird, because HE FORGOT ONE OF THE BAGS!!!

Guy #1 went into an all out meltdown when he saw the forgotten bag. He ran over to the super crowded area where Guy #2 had just been sitting and proceeded to LOUDLY interrogate everybody in the vicinity, demanding what they knew about this unfolding situation. Did they know that guy? What was his business here? What did they know of this abandoned bag?

And then he said it….

Now, in case you were wondering, there IS in fact a word that will bring a crushing silence to a busy room. And yup, that word is BOMB! Because this was the point at which everyone looked up.

Guy #1: <now educating the masses, whose attention he has snagged> “What they do is they leave a bag, walk away, and once they’re at a safe distance they detonate it.”

“Detonate” is actually another word you probably shouldn’t use in a crowded room. I should add that to the list.

Now, you would probably expect this type of proclamation to bring pandemonium to the crowded space, and the trampling of bodies as people push past each other running for the doors.

Yet nobody moved in the least. Because this bag that was so menacing and sinister-ly sitting abandoned………. was filled with Hot Pockets.

Now, I’m not super familiar with the practices of terrorism, but I’m fairly confident that they do not typically involve Hot Pockets. However….

Guy #1: <to the startled customers he is loudly interrogating> “Did he say or do anything suspicious? I’m not trying to cause problems, but if you see something suspicious you’re supposed to step in.”

And then Guy #1, ever vigilant against all Hot Pocket related tragedies, goes to complain to the staff. The wonderful staff (who all deserve raises from this day) calm him down, assure him that Guy #2 is a regular and harmless, convince him that the Hot Pockets will not physically hurt him, and get him to return to his table and stop making a scene…

…and that was when we all noticed his pre-teen daughter at the table. With a look more mortified than anything I have ever seen before in my life, documenting the moment for future use in therapy.

This post brought to you by the City of Durham… because you can’t make this sh*t up! 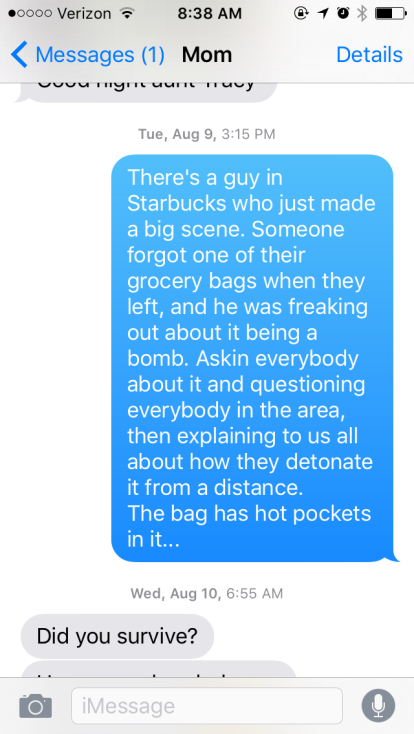 01 Sep This entry was published on September 1, 2016 at 12:01 am. It’s filed under Uncategorized and tagged bomb, eavesdropping, funny, hot pockets, Jim Gaffigan, panic, riot, stampede, Starbucks. Bookmark the permalink. Follow any comments here with the RSS feed for this post.

Older: Kids vs Adults
Newer: There Will Be Blood