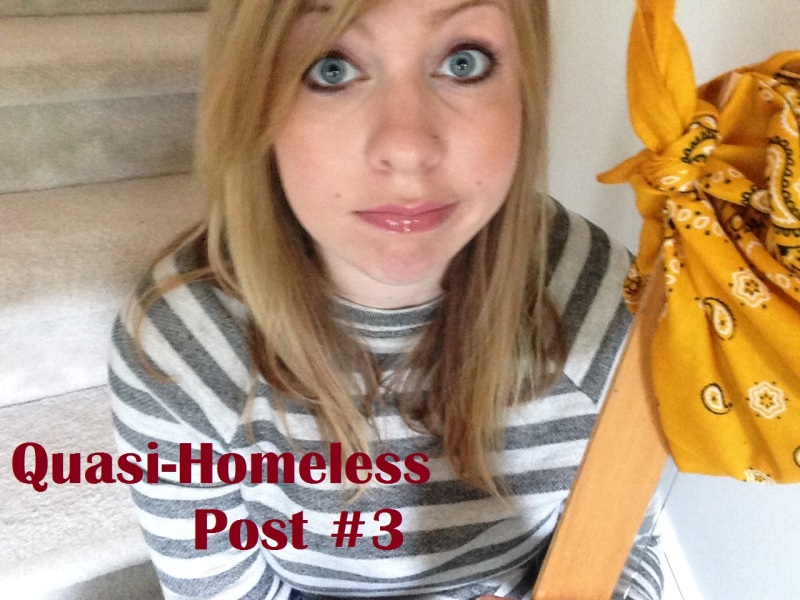 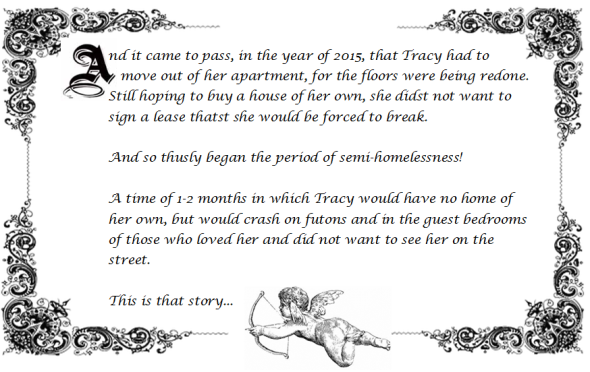 I’ve taken to the outdoors this week.  No, I’m still sleeping at a friend’s house and not on park benches, but it’s been wonderfully cold outside, so I’m embracing more of the outdoor elements of vagabonding this week.

Now, fall makes the outdoors lovable for a brief period, but there are still hazards to be aware of:

And so thusly we begin week 3:

Homeless Log, Day #13
Officer: “Ma’am, would you mind explaining what you are doing with this open flame here in a parking garage?”
Tracy: “Um……………. tailgating?”
Officer: “Alone, at midnight, on a Tuesday?”
Tracy: “Also yes.”
Officer: “Ma’am, this is illegal.”
Tracy: “No, THIS is discrimination.  If there was a football game about to happen, this would be fine, but because it’s a weeknight I’m not allowed to start random fires beside my car or cook delicious hot dogs?  That, sir, is discriminatory behavior and I cannot stand for it.  I am currently in a state of permanent tailgating.”

Homeless Log, Day #14
I legitimately believe that I could live in my office building for at least 2 months before anybody caught on.  In fact, the more I think about it the more sure I am that it is doable…

I could just be like the Phantom of the Office Building, who lurks in the shadows and heating ducts, emerging at night to wreak havoc and pretend that this place that I have no legal claim to actually belongs to me.  Wow, it’s sort of scary how closely those lined up.

Downsides of this plan include (1) the fact that the building is probably most definitely haunted based on all the creepy noises it makes when I’m alone there in the morning, (2) the fact that the space under my desk isn’t big enough for my full size mattress, and (3) the fact that so many people from work read my blog.  Damn my inability to keep thoughts to myself!

Homeless Log, Day #15
Is scurvy still a thing?  Can humans still get scurvy?  If so, I should probably get that checked out.  And yes, all you health conscious people who eat nothing but vegan flavored fiber, I know what you’re going to say already about healthy diets and kale… but in my defense, there is no drive-thru vitamin and salad restaurant.  Also, fruit costs a bajillion dollars!  I mean seriously, kiwis cost $100 a pound now, meanwhile $3.50 will buy you 19 burritos at the Taco Bell.

My mother says that I’m probably being dramatic about the scurvy, and it’s probably just a cold.  But colds are for indoor dwelling people.  As a quasi-homeless person what I have is probably a touch of consumption.  Or the black lung.  Or perhaps the plague?  These things are all possible.

Homeless Log, Day #16
I went to Boone today.  It’s my annual trip that I take with my mother each October because we love cold weather and pretty leaves and happiness.  And we had a great time because my mom is the greatest human who has ever walked this planet.  Also, there’s something delightful about leaving town and pretending that you don’t have any horrendous, gaping life problems.  In fact, I like the idea of running from my problems so much that I am this close to ghosting on my whole life and just hopping on a plane to Paris, where I will smoke long cigarettes and lay draped across pianos, and be a muse to some tortured artist.  Hmmm, that doesn’t sound half bad.  Oh, but wait- I don’t want to learn French.  Scratch out the word PARIS and write SCOTLAND, and then add 1-7 layers of thick sweaters and warm blankets to the picture of me smoking on the piano.  And actually, I don’t like smoking so change CIGARETTES to EATING DONUTS.  Oh, and change MUSE to SMARTASS BLOGGER.  Also, change TORTURED ARTIST to HOT SCOTTISH GUY WITH A THICK ACCENT I CAN’T UNDERSTAND, BUT WHO CARES BECAUSE LOOK AT HOW THICK HIS F*CKING ARMS ARE!  Yup, that looks more accurate.

Homeless Log, Day #17
When you are living on the streets, turf wars happen.  And they are not pretty.  Today things went bad and disrespects were felt.  And cameras were rolling:

Homeless Log, Day #18
Welp, the panic is starting to set in!  I go out of town next week so I have to have my living situation squared away before that.  I’ve taken to looking at Craigslist postings, but I’m not gonna lie… there’s a real rape-y vibe on Craigslist.  So far the most interesting posts I have found are:

You may be saying, “But Tracy, what does this Craigslist endeavor have to do with the ‘Oustside Edition’ of your quasi-homeless posts?”  Well, how nice of you to ask.  Let me show you around my new home.  It’s just under this bridge here in Durham.  I’ve hung some lovely plastic tarps in a hue of safety orange to block the wind.  You’ll notice it’s in one of the less stabby parts of town, because it’s true what they say about location being key in real estate.  Please wipe your feet before coming in, but watch out for needles.  If your cold there is a meth lab next door that puts out a fair amount of heat if you huddle by their back door.

Homeless Log, Day #19
My life is essentially now just a living version of the game Oregon Trail.  For serious, if I traded my versa for a covered wagon you wouldn’t be able to distinguish one from the other.  In fact, I drive a hatchback, which is essentially a station wagon, so YES I am actually travelling the US in a wagon. 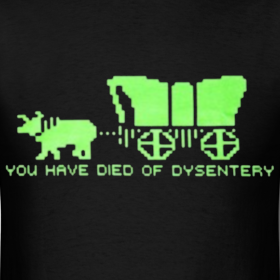 We here at FOR A RAINY DAY hope that you are enjoying these adventures in Quasi-Homeless, because as long as you’re still laughing, then it’s not depressing!  In other news, if anybody knows of any cute and very cheap apartments and/or wealthy single men who don’t mind the sass-mouth then please let me know.

20 Oct This entry was published on October 20, 2015 at 10:49 pm and is filed under Uncategorized. Bookmark the permalink. Follow any comments here with the RSS feed for this post.