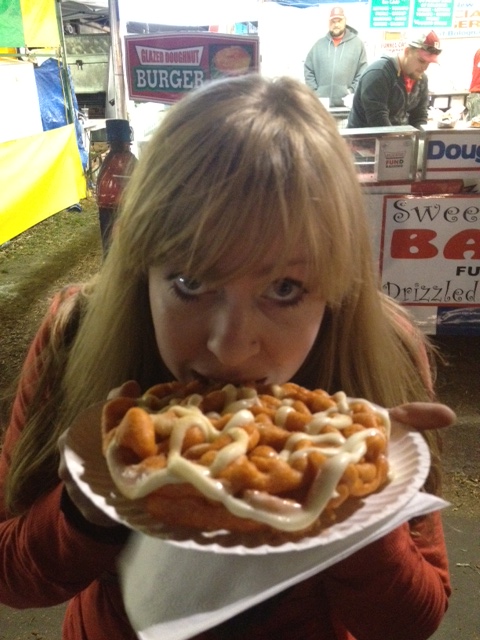 The NC State Fair is a thing of beauty.  I feel like that needs to be said before I proceed.  If you are lucky enough to live in the triangle here in the great state of NC than you are really living in the chosen land.  Congratulations.  The rest of you, why aren’t you moving here?

Every October for 10 days the carnival folk descend on the Raleigh fairgrounds.  Then over the span of those 10 days we throw money at them, so excited for our yearly fix.  The State Fair is where we collectively live up to every stereotype people hold about Southerners and we don’t care because we’re blissfully happy.  There are at least 3 buildings dedicated to livestock and 1 that showcases award-winning crops; seriously, zucchini with blue ribbons.  That’s a thing down here.

And then there is the food.  If you polled 100 people at the fair, 99 would say they were at the fair for the food.  That 1 other person, they would say they are there for the exhibits but they’re lying.  Nobody is looking at an exhibit unless they’re doing it with a funnel cake in their hand.

Blinking lights cover every booth, and in those magical little booths everything you can imagine is being fried.  They come up with things you would never dream of eating, but for that week all bets are off.  This year the new thing (I kid you not, I saw it with my own eyes to verify) was a sloppy joe, but the bun was 2 Krispy Creme donuts.  That is an actual thing that somebody invented and people are buying.  But this affords the rest of us the rare opportunity to actually watch another human being in the exact moment that they give up on life.  Because you really do have to give up on life to 1)think that a Krispy Kreme sloppy joe is a good idea, 2)pay money for it, and 3)eat what has to be the messiest, most impossible thing to eat.  The only way I imagine you can eat such an odd culinary treat is to just bury your face in the plate.  Having said that I tried to get my friend to eat one.  He declined, which I guess speaks highly of him.  I guess.  Disappointed. But speaking of sloppy joes, I was shocked and saddened that only 1 person new about the sloppy joe song when I started singing it.  Apparently a generations culture has been forgotten.  Allow me to educate the deprived:

The fact that people don’t know about that song leads me to believe that you guys are not using the internet properly.

In keeping with the Chris Farley theme I assigned to the night (unintentionally) I opted to try the polish sausage in honor of this:

And then the quest began!

I had heard rumors and mumbles of a mythical thing known as the pumpkin funnel cake.  Game on!  I heard of this last year and searched for it with no luck.  That loss haunted me for the whole year, and so this year when my opportunity presented itself I stepped up again, un-jaded by the crushing defeat of the previous year.  Equiped with a google confirmation that this treat did in fact exist I set out on my search.  The first lap around the fair I took a subtle approach, casually glancing at the booths searching.  Playing hard to get.  The second lap the rest of my group was almost done eating and I panicked.  It was slipping from my fingers once again.

Recruits were drafted in to the search.  We spoke to the cops at the public safety booth and they were surprisingly unhelpful in the investigation.  Hope I never get kidnapped bc I’m not reassured by their investigative skills.  30 minutes later and still cake-less the whole group was involved: some to prove to me that it didn’t exist, part because they wanted me to find it, most because they wanted me to stop talking about it.  We got possibly the worst directions from a toothless man who explained that it was down by the stand selling corn…because every stand at the fair is selling corn.  After asking literally every stand that claimed to sell funnel cakes and getting glares from most of the people working in those booths we finally found it.  Their sign advertising PUMPKIN FUNNEL CAKES was expertly placed in the very back of the booth, up high enough that it wasn’t visible under the awning.  Marketing geniuses! But it was worth it, oh boy was it.  What did it taste like?  Like fall covered in cream cheese frosting, rolled in cinnamon and sprinkled with a potential heart attack.  But I ate it while walking so there were no calories, they canceled out.  It’s science.

Things we learned from this adventure:

2)I’m ridiculously stubborn and apparently stubbornness pays off.  That’s the lesson I learned and am going to base my future escapades on.

3) If you get in the way of a woman on a journey for a piece of dough that was been fried, rolled in sugar, sprinkled in cinnamon and doused in cream cheese frosting she will rip your face off.

4) Those leash back-packs made for kids should be made in adult sizes.  I tend to wander.  True story: at IKEA i got so excited I got lost and my sister had to find me using phones and a very loud game of marco-polo.  By the end of that day me and her 2 year old had the same rules: one hand on the cart at all times.

The quest was a success.  Now I’m ready to take this skill on and translate it into a new career, hunting down mythical creatures.  Next stop Scotland to find the Loch Ness Monster, then on to the Western US to locate Big Foot.  Who wants to buy me a ticket to Scotland, I promise it will be worth your while?  I’m not joking about that, passport and bags are ready.  It’s a tax deduction if you’re willing to lie to the IRS.

So, face covered in powdered sugar and shame. We carried on.  Below is a video of how it played out:

That’s what that video is about, right?  Eating funnel cakes?  Can’t for the life of me imagine what else it could be referring to. 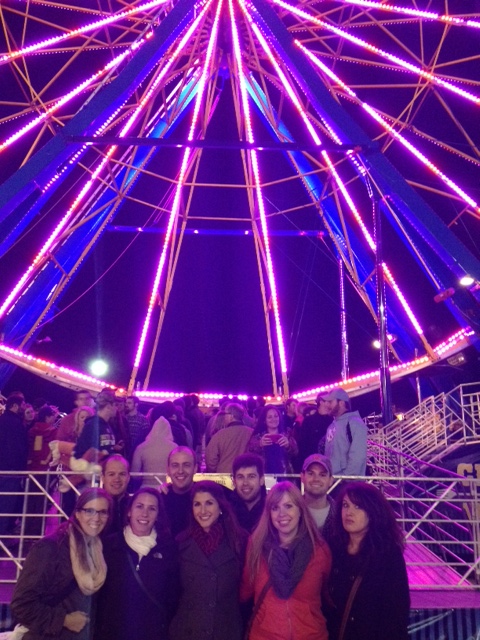 25 Oct This entry was published on October 25, 2013 at 9:36 pm. It’s filed under Uncategorized and tagged fall, funnel cake, pumpkin, state fair. Bookmark the permalink. Follow any comments here with the RSS feed for this post.