You may have heard that I was a little quasi-homeless for the last FOREVER!

In fact, I made so many jokes about sleeping under my desk at the office, that I came in one day to discover THIS:

This is what happens when the people you work with are INCREDIBLE, and also they have a surplus of boxes in the IT department.  It should also be noted that:

But friends, the wonderful news is that I AM NO LONGER HOMELESS!!!!!

After several months of staying with some of the most wonderful people I have ever known, living out of a giant IKEA bag, spending hours and days in coffee shops, and commuting across the freaking state on a regular basis…

I CLOSED ON MY HOUSE ON TUESDAY!!!! 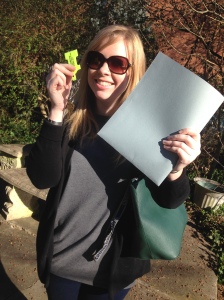 Homeless no more!  In a house! A house that I own! A house that has no furniture because the snow storm of the century hit before I could get my stuff inside!  A house that is all pretty and girly and covered in glitter and candles and soft blankets!

Friends, say hello to the first commitment I have ever made in all the 30 years of my life!!!  That is actually true.  For the girl who always likes to keep her passport and a bug out bag handy, this is a huge step.  I like to know that at any moment I can pick up and disappear, so I would call this new housing development PROGRESS.  What’s next?  The world of grown up responsibilities and long term commitments is before me!  Hey, maybe I’ll try actual relationships and putting down roots… in a couple years?  I mean, you’ve got to crawl before you can walk.

Real Estate: It’s the commitment equivalent of getting a face tattoo, but for your credit.

Older: I’m Not Taking The Fall For You
Newer: Why I Don’t Understand Commerce

One thought on “Tracy Learns To Commit”